>Newsroom>Lessons from a refugee family

Lessons from a refugee family

Imagine your father leaving his conflict-riddled homeland in a boat for a distant country to seek a brighter future for you and your family.

Pakistan-born brothers Ali Reza (Year 11), Hassan (Year 9) and Ali Sena (Year 8) Hossaini don’t have to imagine. That’s exactly what their father did in 2009.

The boys speak of Newington College and Australia with enthusiasm – a response born of knowing the sacrifices their Afghan parents, Abdul and Momina, made for them to have a better life in Australia.

Abdul arrived in Australian waters by boat from Pakistan via Indonesia in late-2009, having started the journey in February that year. The boat was intercepted by Australian border authorities, and he was detained at Christmas Island. He was granted permanent residency in 2010 and arrived first in Brisbane before making his way to Sydney.

Meanwhile, Momina, Ali Reza, Hassan and Ali Sena remained in Pakistan. After years apart, in 2012 Abdul was able to apply for his family to come to Sydney. The finally arrived in Sydney from Pakistan on 5 May 2013. 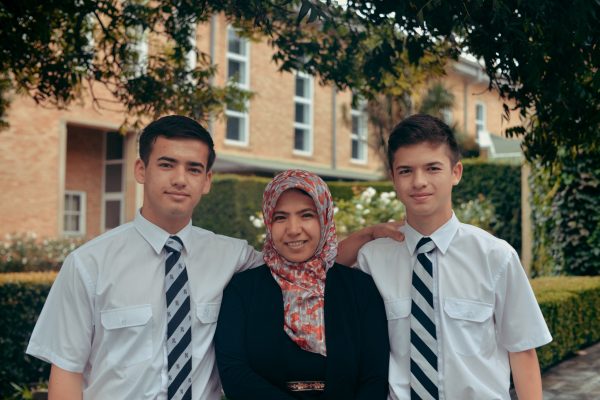 ‘We were so happy to see our dad after so long away, his experiences during conflict in Afghanistan and his journey to Australia. It was a relief,’ Hassan said.

It was a huge journey, and the trauma of war remains with Abdul and Momina, who are members of the Hazara ethnic group, a minority in Afghanistan who were victims of sustained persecution and massacres in 1998. Momina recalls the trials and violence of her childhood.

‘In 1993, when I was 7 or 8, the Taliban attacked our home with bullets and rockets. We found a safe space in a building in Afshar that included an underground bunker – so many families were there. It was 12 stories high and had two underground levels.

‘We spent about two and a half months there. When we came out from under the building, we saw that the whole area was Taliban-controlled.

‘There were more than 3000 people hiding beneath that building. Because the building was very big, there were four, five doors around it to enter and exit from. When the people went to the doors to exit, the Taliban fired three rockets at the building and the people rushed on the doors to get out.

‘We were lucky to survive. My cousin’s son and daughter were killed.’

Soon after, Momina and her family fled to Pakistan. Girls’ education was discouraged, so at 17 left school and married Abdul. Abdul came to Australia in 2009 and after four long years, he was reunited with Momina.

‘When I see news of attacks in Afghanistan on the news, I am shocked and reminded of my years there.’

Afghanistan is a long way from Stanmore, but the trauma of that time lingers. However, the Hossaini family are optimistic, and Ali Reza says his family has been transformed by living in Sydney.

‘It’s amazing. You get different opportunities to succeed in life. If you miss one there will be more coming. When we got an opportunity to come to Australia, we couldn’t let it go.’

The boys started at the College in 2021 and immediately relished the subjects and co-curricular activities available. Football and Athletics feature on the co-curricular lists of all three boys; Ali Reza – who received a 2021 Newington Award for Character and Good Citizenship in 2021 – has added Table Tennis and Newington Challenge to his list.

‘The Director of Football was kind and welcoming, and that helped us settle, and the boys did too. Playing football helped us adjust to the school,’ he said.

‘I’ve learned that students are Newington are responsible, respectful and kind. I’ve changed massively – I have more goals now, there is a high standard at the school. I want to finish Year 12 and pursue a career in mechanical technology,’ Ali Reza said. ‘When I was in Year 9, I was a bit lost and a troublemaker, but I have changed massively.’

Hassan, who has also taken on Newington Challenge and Table Tennis, is enjoying the social aspect of Sydney life. ‘Football and mates’ occupy his time outside of school. Ali Sena has joined the College Basketball program.

Adjusting to life in Sydney has been challenging at times but one story exemplifies Momina’s determination for the family to thrive in their adopted country.

‘The first time I drove by myself in Australia was the night of the Year 8 mother and son dinner. I had to drive across the Harbour Bridge, which was scary for me. I thought I was lost and wouldn’t be able to find it. But I made it. I met lots of parents and Mr Parker and it was enjoyable.’

Newington’s means-tested scholarship coordinator Raja Yassine says the Hossaini family are a special and resilient family who have formed a mutually beneficial relationship with the College.

‘We’re so happy to have the Hossaini family at Newington College, she said. ‘This is a way out of the trauma they’ve endured.

‘To many of our staff and students, they are the exemplification of courage, kindness and perseverance. Education is the key to transformation and the lessons we are learning from each other on this journey is nothing short of humbling, empowering and fulfilling.’

Thank you to the Hosseini family, Raja Yassine and Aiden Carter for their assistance with this article.