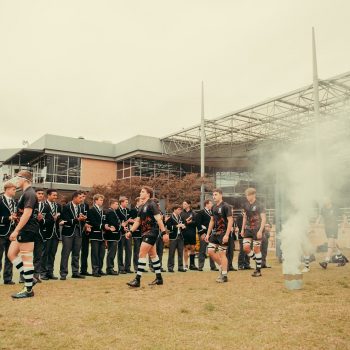 On the Saturday of Reconciliation Week, Aboriginal Elder Mr Brendan Kerin from the Metropolitan Local Aboriginal Land Council performed a smoking ceremony on Johnson Oval as the 1sts and 2nds teams from all seven of Newington’s winter team sports – AFL, Rugby, Football, Cross Country, Rifle Shooting, Volleyball and Fencing – and the senior teams of Newington’s prep schools, Wyvern and Lindfield, wore a new jersey onto the field.

The jersey incorporates the Dharug word NGALAYA, chosen by Indigenous and First Nations students at the College for its meaning of ‘ally’ and ‘friend in battle’. The word was selected to symbolise that everybody who wears the Newington College Indigenous jersey in 2021 and beyond is now an ally, accepting the responsibility to support their Indigenous brothers and sisters.

The College hopes that this jersey also represents our ongoing commitment to acknowledging the traditional owners and custodians of the country upon which we work, learn, and play. It is part of our continuing efforts to build a common life together with the people whose vital history upon this land is part of the oldest continuing culture in the world. 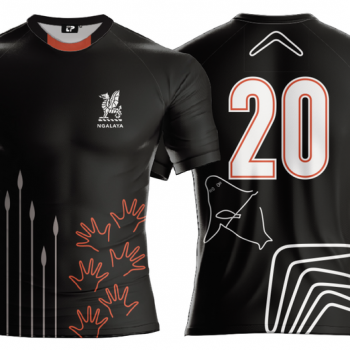 This jersey pays homage to the Cadigal (Gadigal) warriors who stood strong with their spears until the arrival of a different type of warfare was introduced to their land. Only 233 years ago, the robust physiques of the local tribesmen would be challenged for the first time in tens of thousands of years by germs and guns.

Prior to the western concept of a ‘house of worship’, the Cadigal practised ceremony out of doors, mostly upon hilltops and on sandstone platforms. Thankfully, many examples of the dedicated efforts in the way of rock carvings still remain. The Cadigal dreaming is GUWARA, the whale, indicated by the many carvings around the harbour today.

Customary to Koori tradition, hand stencils are a ‘signature’ of presence of the generations of young peoples partaking in ceremonies. Most rock caves within the South East carry stencils placed there at least 200 years ago and prior. An ancient ‘QR’ code identifying an individuals entry into that space at that time.

We bring these elements together on this strip in remembrance of those who cared for the country where we now live, work and play. May the young warriors donning these jerseys carry the energy and might of the young men who once walked the same tracks. 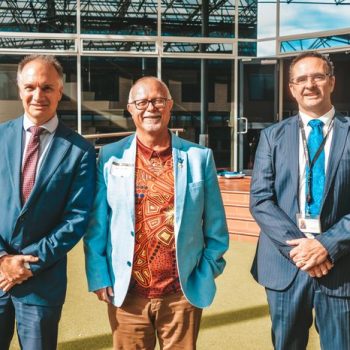 In addition, we were privileged to hear from Mark Morrison OAM, principal of Macleay Vocational College in Kempsey, and two of our Year 9 boarders during our student run Reconciliation Week assembly.

Newington and Macleay Vocational College share a 10-year relationship, started by Dr David Mulford who sits on their advisory board. Will Stormont and Addison Eastway from Moulton House, which works with Macleay Vocational College throughout the year in order to raise funds deliver care packages, invited Mark to take part in a Q&A alongside Mr Steve Muir. We thank him for the very powerful stories he told in answer to the questions he was asked.

Year 9 boarders Tallis McEwen and Laiken Robinson-Cooper shared their personal stories with us at assembly. Tallis is a proud Wiradjuri and Kamilaroi man who comes from Wailwan Country. Tallis told us about his totem, an emu, his spiritual animal in the Dreamtime. His totem has existed for more than 60,000 years, and he explained the totem flows in your blood from your mother’s side. Laiken is a proud Wailwan, Kamilaroi and Torres Strait Islander man. Laiken told us how important Reconciliation week is to people who have had to fight for the right to do normal things, like voting and being accepted as a citizen in your own country.

The Boarding House continued our Reconciliation Week activities with a formal dinner, where Deputy Headmaster/Head of Stanmore Mr David Roberts, who spoke about the College’s continued role in the pursuit of reconciliation.