During Term 1, our Year 9 Civics History students worked in groups to research and write about the school careers and war service of our Fallen soldiers.

This work was assisted by a grant from the Commonwealth Department of Veterans’ Affairs. The work on the Great War Honour Roll provided an opportunity to replace an unprepossessing old cabinet which housed the Roll of the Fallen, with a beautiful new mobile cabinet which matched the wood of the Founders Building vestibule.

The Roll of the Fallen itself — a volume containing the names of Newington’s Fallen from both World Wars, presented to the College by the Old Newingtonians’ Union in 1961 — was updated in fine calligraphy with three missing names from the First World War, through an initiative by The 70 Club. The name of a Fallen Newington soldier, recently identified, was also added to the Great War Roll of Honour. The reading of the Roll of the Fallen, a staple of Anzac Day services for nearly a century, took a new form in the College’s Centenary Service. In a moving video produced by Ms Amy Yang, of our Communications Department, Year 9 students read the names of each of the Fallen over the haunting music of ‘Benedictus’ from The Armed Man: A Mass for Peace by Karl Jenkins, while photographs of the Fallen and other wartime imagery, appeared on screen.

The students used a range of College and online research resources, including digitised copies of the WW1-era issues of The Newingtonian. Selected assignments were available for our visitors to read on 29 April. This research assignment was repeated in Term 3 for those students studying Civics History.

Following the Parade, Service and poppy ceremony, guests were invited to explore an exhibition, Newington and the Great War, in the Chaplain Peter Swain Archives Exhibition Room which is open for the rest of 2015.

An essential support for a number of these projects has been the collection and verification of a large amount of information about Newington’s First World War soldiers and its collation and integration into a structured database format with existing information resources. 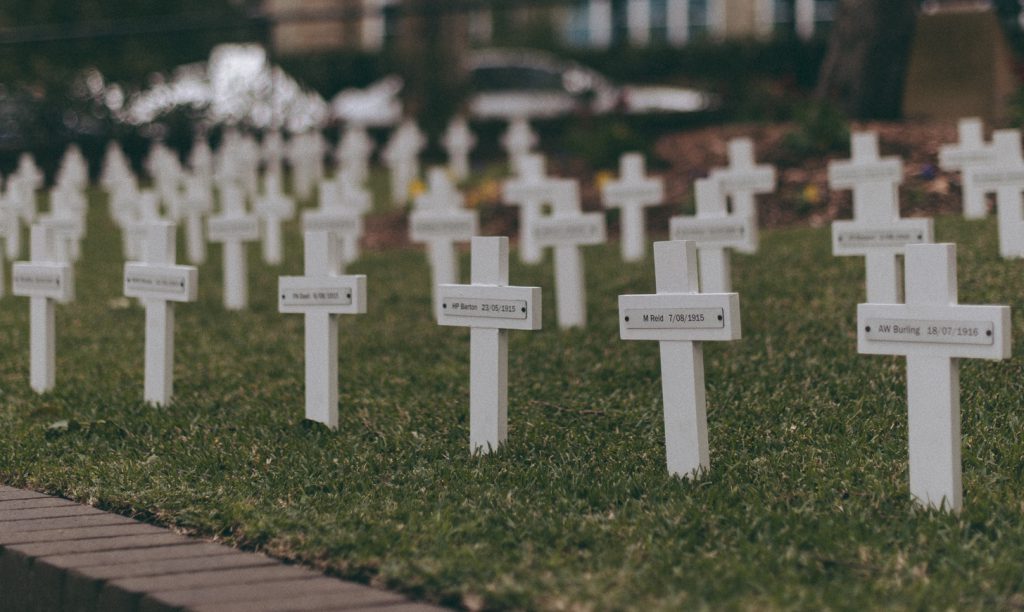 Another striking sight was that of 111 white crosses, each bearing the name of one of Newington’s Fallen, planted under our Lone Pine. The crosses were made by the College’s Year 7 Technology students and are being presented to relatives of the Fallen, where they had been identified.

The College’s two First World War memorials — the Great War Honour Roll and the Memorial to the Dead, both dating from 1922 — needed to be in the best possible condition for their important roles in the ceremonies on 29 April; therefore, the College’s Property Department oversaw their expert repair and refurbishment in the months leading up to the event.

This article was first published in the NEWS Magazine, Spring 2015 (page 6)