What happened on ‘Golden Ticket Day’

A message about 'Golden Ticket Day' at Newington College.

What happened on ‘golden ticket’ day

What happens when a College Headmaster with 25 years of experience as a teacher swaps places with a Year 8 student for a day? Mr Michael Parker found out when he randomly awarded his ‘golden ticket’ of 2019. Year 8 student Jack Rudd was the lucky winner. Under golden ticket rules, Mr Parker had to do all Jack’s classwork and all Jack’s homework for a day. And Jack? Well, Jack could take it easy, but he learned a few things too.

What the Headmaster said …

As the day dawned I got dressed in my Newington tie and adult uniform (a grey suit), and made my way over to the Metcalfe House area. Jack’s locker was surprisingly neat – I am sure it is like that all the time. It was a bottom locker though, and I experienced what it was to organise your books with large Year 12s looming over you.

On the way to class the General Duties Master saw me and checked my uniform. Thankfully my top button was done up and my shoes were shining. Otherwise Jack would have received a demerit.

Jack made the occasional comment and looked out the window.

I designed an individual Science experiment in my pair. We were looking at whether Berroccas fizzed up more quickly if you cut them up, which will have strong practical application for some 20-somethings on a Sunday morning. (The actual hypothesis was whether ‘objects of different surface area are absorbed into the surrounding liquid at different rates). We got clear, good experimental instructions and then got on with it.

Jack watched on and looked through the glass in the door.

I didn’t bring my PE uniform, and so risked a demerit. Luckily I was allowed to play in my suit but I did have to take my shoes off. Fortunately I was wearing matching socks.  I played some warm-up games of dodgeball. I hit someone and someone hit me.

The person who hit me has remained anonymous and should plan to stay that way.

In this class I Iearned to solder. It was a great, practical and clear exercise. Unfortunately, my advancing age means my short distance vision is getting decidedly blurry – and this is the exact distance you are supposed to hold the extremely hot soldering iron and the extremely thin wire. I was lucky to spend the period soldering the metals and not my fingers. My results, if I may say, were quite good.

Jack promptly appropriated them and submitted them to the teacher as his own.

To revise for a test the next day each person worked on an online practice paper. The teacher was able to spend the period helping individuals and clusters of students. We got everything right, which may have been my expertise but was more probably Jack’s.

We did a lesson on paragraph structuring and style. Using clips from the film Arachnophobia, we really focused on how to make your writing better. As I spent several decades as an English teacher and years as an HSC English extension marker, I hope Jack was satisfied with the quality of his Year 8 paragraphs.

Jack leaned back and read a book.

At the end of the day we went back to the locker area. ‘How much homework did you get’? called out his friends, knowing full well that the deal was that I did his homework too. ‘None!’ complained Jack,  ‘for the first time this year’. It’s good to see that the staff, in their small way, were looking out for me. 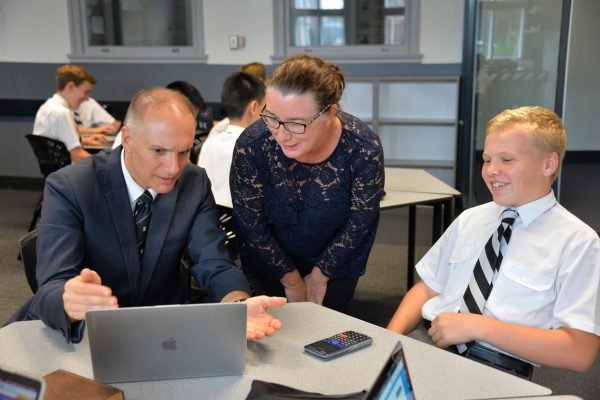 When I first sat down, I tried to give away the envelope to anyone sitting around me because I thought I would have to go up on the stage. But my mentor Ms Lak told me to hold on to it! I felt extremely lucky, especially seeing that I sat on one chair out of around 1500 that had that envelope on it.

Hanging out with the Headmaster

I thought I would be really nervous sitting with Mr Parker all day. But he was super friendly and asked me a lot of questions about myself which made me feel more at ease. I’m pretty sure all my classmates enjoyed having him in the class, but I’m not sure my teachers were as relaxed as I was!

My favourite part of the day by far was when we had practical PDHPE and we got to throw dodgeballs at the Headmaster. This is not something you get to do every day. I’m sure other people in my class really enjoyed this as well, except for the time someone nearly hit him in the head!

Did the Headmaster do all your assignments?

Yes, although he didn’t have any homework to do, which was bad luck for me.  Also, in English we had to write analytical paragraphs, which I was happy that I didn’t have to do because it was the last lesson of the day and they can be hard work!

What the Headmaster learned …

Apart from how to solder and how many hectares are in a square kilometre, I learned how varied and interesting a day in the life of a young man can be – much more so than when I was a student. There were periods of theory (such as English) and periods in which everyone got to run around or do something practical (such as Design and Technology and PDHPE). There were plenty of creative tasks, such as scripting, and plenty of work on ‘core stuff’ such as measuring, writing and scientific design. The lessons stretched the students. The teachers were all dynamic, caring, and excellent (and I don’t think it was just because I was in the room). There was no bland copying out or mere recycling of content.

I also had a number of ‘educator’ reflections. I was interested in what motivated people – whether it was doing the task to the best of your ability or coming up with something that would beat the other groups. I was interested in the dynamics of group work when you were right in the middle of it – who did what and when. I learned the advantages of online learning when it is done right. I was reminded how facility with language is such a combination of general immersion and the studied learning of structure, vocabulary and style

I would like to thank all the Year 8 students who worked with me as naturally as possible. I would also like to thank all of the teachers – Andrew Light, Mick Madden, Trent Dyer, Paul Wood, Klarissa Stellmacher and Billy Stevenson – who were willing to have me in their classes.

All in all, it was a very good day for me. I hope it was an even better day for Jack.

I thought that the headmaster would do less of my work, but he even did my practice maths test for me. I wish we could have found out the mark he achieved.

It was great for him to see a day in the life of a student, but I also saw how he experienced each day. I must have heard ‘Good morning sir’ a hundred times as we walked between lessons. 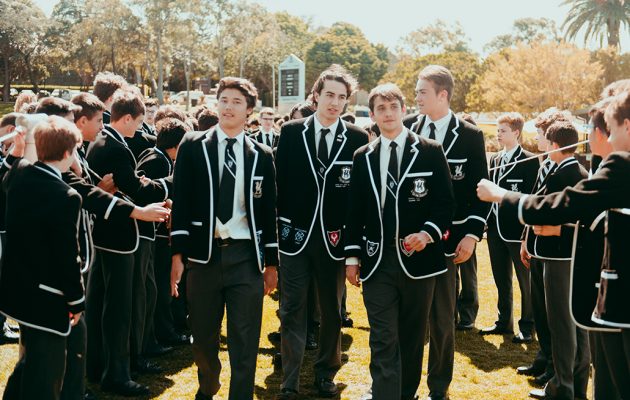