Accomplished in academics, sport and a range of co-curricular activities, Sebastian Iannuzzi (ON 2016) graduated as a certified all-rounder. He returned to the College to speak to the Class of 2021 at their Academic Excellence assembly about the cost of inaction and the importance of leaving your comfort zone.

Below is a transcript of his speech.

Good afternoon young men of Newington. It is a pleasure to be invited back to speak to you all today and I’d like to thank Mr Parker for that honour. 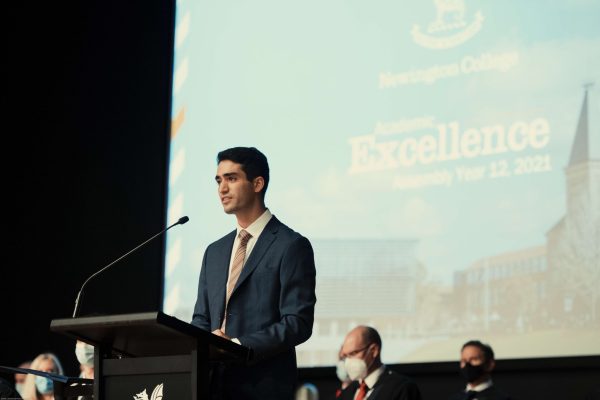 First and foremost, I’d like to congratulate all those who are receiving a prize today. Life has been hard these past few years, and the fact that you have all thrived academically speaks volumes to your character. To the class of 2021 in particular, as an old boy, I was extremely proud to hear about the excellent results in both the HSC and IB. It amazes me that with all the disruptions, disappointments and difficulties last year, you were able to compose yourselves and achieve such greatness. The grit and mettle you have developed will serve you well in your bright careers. It almost seems ironic that I should speak to you about thriving towards success when I am unsure how I would have fared in your shoes. So, congratulations once again.

For all those not receiving awards today, you still have much to be proud of in making it through another turbulent year. I’m sure the lessons you have learnt will help you flourish in the future, and I implore you to remember the class of 2021 as inspiration.

When I finished year 12, I remember feeling lost. Lost in a world of possibilities. I had dreams of playing football at college in America; I wanted to study business in Milan; I craved the mysterious awe of Oxford; I contemplated feeding my love of science with a degree in engineering. But, at the same time I couldn’t let go of the opportunity to spend my early adult life with my brothers. In the end, I made a choice, a choice to study Medicine at Sydney University, close to home.

All of us come to cross-roads in our lives, some more simple than that which I found myself at 5 years ago, but many much more complicated and daunting. And so, today I’d like to talk to you all about choice.

Opportunity cost is the price you pay when you make a choice. It refers to the opportunities you lose, the doors that close, when you decide to take a certain path. For many young people, it is opportunity cost that causes the greatest fear and anxiety. We quickly realise that time is our most precious asset. So, whenever we make a choice, whether it be starting a job, deciding on a degree, getting into a relationship, we are starting a new exciting adventure. But at what price? At the price of countless other adventures and at the expense of great amounts of our treasured time.

Yet, in my few years after graduating, I’ve noticed something odd. When you speak to those whose lives are behind them, you rarely hear them lament that they made a choice, that they tried something new, that they were sad to sacrifice their time. No. Instead, they’ll speak of a different regret. The regret of not applying for a job, not starting a degree, not telling someone they loved them. Isn’t that funny? The way that life has taught them to deal with opportunity cost is to seek it out. So, I can’t help but think that the cost of making a choice and taking action is in reality far less than the price of doing nothing at all. Yes, choosing to stay in Australia has meant that I may never fulfill those other dreams, but for all the doors that my choice closed, it has opened just as many.

Now, I find the idea that the course of your life comes down to individual choices quite liberating. It means that we all have the opportunity to set something great in motion with the small decisions we make each day. A seemingly small choice to take action can create a habit and countless successes start with the creation of a habit. In this digital age, we have become so obsessed with instant gratification that we overlook the small changes that could bring us success in the future. The small choices you make now, will accumulate and compound. The best chance of achieving your goals, whether it be playing sports professionally or even just passing your next test, begins with a daily choice of how you will spend your time. And the best time to make that choice is now.

It’s ok if you don’t know what path to pursue. But, I’d encourage you to try taking action now, to start a new habit and see where it can take you. If you realise it’s not for you or you make a mistake in the process, good. You’ll learn from it and be able to make better decisions for yourself in the future. So, even though planning, hoping and dreaming are all important. Too often, we’re obsessed with optimising our plans before we start. And in that delay of overthinking, the regret of inaction is born…. There have been countless situations where I’ve planned out how I’m going to study for my next exam or how I’ll train for my next trial, continuously changing my mind as to what the best approach would be. When in reality, if I had just started studying or started exercising from the onset, I would have been much better off. It’s far easier to optimise a habit that you’ve started than it is to start an optimal habit.

The last thing I want to talk about today is “the beauty of the struggle”. Oftentimes we’ll choose to steer away from the hard path. We’ll be happy to stick to our routines and stay in the comfort zone. But, with brutally honest introspection, we realise we’re selling ourselves short. It’s hard to describe the feeling, but the satisfaction of pushing your own limits and performing at the highest level that you have known is second to none. Even though the final months of year 12 for the class of 2021 were the most taxing, I’m sure they’ll agree that they will look back on them fondly. Not because of the results, not because of the destination, but because there is nothing more rewarding than improvement, nothing more satisfying than surviving a struggle. And the best environment for this is that hard path that we too often shy away from. That feeling isn’t limited to an academic context though. Many of the athletes and musicians here will know that thrill too.

In my final English exam at school, I wrote about a William Yeats poem. It’s a monologue of an Irish pilot, flying a plane into war. He says “I balanced all, brought all to mind, The years to come seemed waste of breath, A waste of breath the years behind In balance with this life, this death.”. It has always stuck with me. He isn’t saying that his life has no purpose. Rather, he admits that his life would be plagued with emptiness if he doesn’t choose to fight, if he doesn’t choose to take the hard path. The poem teaches us that the regret of not challenging yourself is similar to the regret of doing nothing at all.

In conclusion, I encourage you all to realise that you yourselves are capable of determining your future’s path through your choices, both big and small. Don’t hesitate with fear because you don’t know which path is greenest. Instead, make choices that will challenge you and seek out that hard path that will allow you to discover what’s possible for you. Finally, ask yourself what’s stopping you from making a choice to start something great now.