Why Mr Parker got a late note

Two years ago, a random Year 8 student at the school won a ‘Golden Ticket’. It meant I had to go to all his classes for a day, do all of his work and do all of his homework. This year we went one better and gave out 20 golden tickets to Year 8 and 9. Twenty members of the Academic Executive, me included, all dutifully threw themselves into a day’s worth of lessons.

My own day was very interesting. Unfortunately Brendan, the student I was working for, was held up before school, so I started Period 1 sent out of class and having to get a late note. I slinked up to Mrs Forgan’s office and gave my excuses under her stern and watchful eye. Strangely, other students sloped away from me guiltily as I approached the desk. 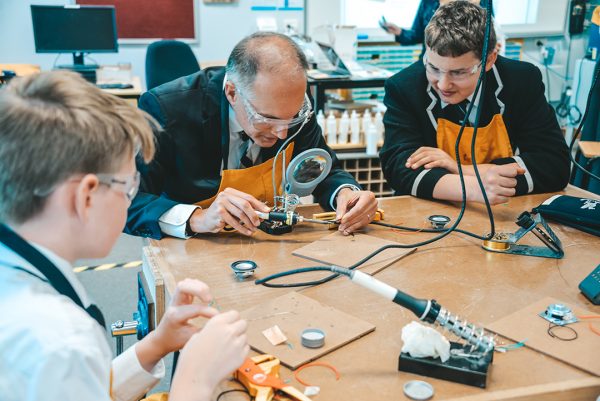 I was eventually able to rejoin the Maths class and shake off the dust when it came to rates and ratios. I then did some soldering in D+T and learnt that my middle-distance eyesight is failing more quickly than I thought. I had to concentrate hard not to solder Brendan’s fingers to the circuit board. In Geography I was able to look at how fast the world was changing technologically with a series of activities.

In Drama, as well as playing a game of ‘Bang Shoot’, I had to roleplay being a dog chasing an ibis across the floor. There was a video taken of this, but it has been purged from all our systems with a ruthless totality that has left the filmer agape and perhaps afraid. Finally, in English (the subject I used to be the Head of Department of here) we began with wide reading. I was able to read Brendan’s novel about teen pirates for ten minutes, while he was reduced to reading a thesaurus he found in a book bin. I then had to answer a bunch of questions about how my childhood dreams had been crushed now that I was an adolescent and what my relationship with my parents was like. I was circumspect in my answers. But it gave me pause for thought.

Other teachers report all sorts of different activities. David Roberts got to play in a violin ensemble. Dylan Bartlett got to dissect a rat. Wayne Cox did his golden ticket on an ‘assessment day’ and had four assessments (which I hear he passed). Nick Wainman decided to try a traffic cone design for his bluetooth speaker. Karl Watson discussed his favourite superheroes in an English ‘hero’s journey’. One teacher failed Latin. Another was told by the student that he was reluctant to have the teacher do his classes because it might hinder his academic progress.

The main purpose is of course to give students the opportunity to have a middle-aged man or woman to do all their classwork. At the same time, the Academic Executive can’t help but pick up lived insights into what it is like to be a boy learning at Newington. They get to see how hard the work is, how much writing they do, how much variety there is and so on. Instead of seeing a 50-minute slice of a boy’s day, they get to see the whole pie. Several Heads said to me that it was the best professional development they had ever had.

I was impressed with the variety of activities and work that the students do across the span of a whole day. All our teachers were very good in their different ways – educated, engaging, and personable with well-planned lessons that had high expectations. At the same time, I would have liked to have seen some more small-group discussion somewhere in the day – not every period, but a little more across the span of the six hours. Another teacher pointed out to me that there could be more directed writing across the day. A third said the boys needed more chances to move around during a class. The Academic Executive are coming together in the next few weeks to distil what they learnt and see how it can be applied across the school.

I hope this all helps in having a vibrant and open-minded culture around the College as well. Some staff have already put their hands up for a Golden Ticket next year. So for anyone who didn’t get a chance this year to have a teacher do all of their work, there is always 2022.