Our Assistant Head of Mathematics, Karen Lak, has been at Newington College since 2007. In addition to her role as a teacher, she also leads the F1 in Schools program on the Senior Campus. Her passions outside of school are varied and impressive. We hope you will take some time to read our Q&A with Karen, below. 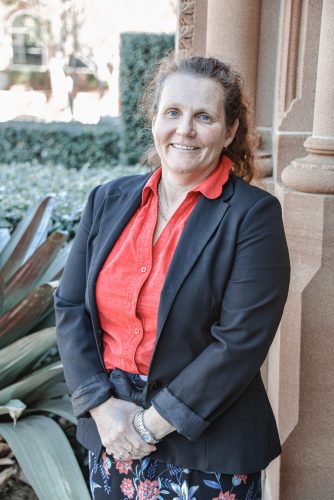 Q: Plenty of people can tell you why they don’t like maths – but what’s great about it, and why do we need it in 2019 and beyond?

A: Maths is everywhere, your budget, design, art, architecture, patterns, to name a few. There is beauty in maths, and once you have the process, it gets easier each time to repeat. Maths helps with puzzles, and it is so lovely to see a straightforward process that can be used again and again. You can’t build a house without maths, train networks need maths, building finances need maths, and so it goes on.

On her passion for cars and the F1 in Schools program.

Q: Do you race cars yourself?

A: Yes, I do, but now I only compete in Motorkhana, which is a wet track, and you have to get through a set pattern faster than anyone else. I volunteer as a flaggy at the races as well.

Q: Would you describe yourself as a revhead? Or something else?

A: Probably. I am a car enthusiast. I love cars, their design as well as their features and driving them. I always have since I have been young. I get as much joy from fixing cars or getting them ready for a car show as I do from driving them or watching them at various car races.

Q: What do boys learn from the F1 in Schools program?

A: They learn budgeting, time management skills, design, public speaking, engineering and manufacturing process skills. Boys need to talk to people in the industry and get the knockbacks when they ask for sponsorship. They build resistance from this or when the car they have built does not work or match regulations. They learn effective team building and what it is like to collaborate.

Q: What’s the most exciting thing they do as part of the subject?

A: I would think most of them would say racing and building cars.

Q: If you could own any car, what would it be?

A: A Porsche 928 (I used to have one and they are just beautiful) but I love my Rexy (my Subaru WRX) and would always have one in the garage.

On the Fencing program.

Q: What attracted you to fencing?

A: I like the martial arts side of it, and the need to think on the spot about how to best beat your opponent or get out of the way of his attack.

Q: What skills do you need to be a great fencer?

A: The ability to compete on your own while still being part of a team. Agility, strength and speed and the ability to think quickly on your feet.

On volunteering outside of school.

Q: What’s involved in being a St John Ambulance officer?

A: Training people in first aid and attending volunteer duties to help those in need of first aid. I am often the commander at an event or in charge of radio control. As an officer, I am expected to lead a team and be the go-to person when a serious situation occurs. I liaise with SES, ambulance personnel, police and the firefighters when required. Duties can be concerts, sporting games, camps, car races etc. St John Ambulance is the only voluntary organisation that runs as a back-up to the Ambulance service and is listed on the NSW State emergency plan.

Q: Could you give an example or two of when you’ve had to use your skills?

A: I have attended to a young man with a spinal injury, I have been at numerous car accidents that have occurred when I am out and about and stopped to render assistance. Rock concerts are always a challenge. You learn to use your triage skills and can have a lot of demands for first aid all at the same time, some serious and some not so serious. I have been with St John for 25 years, and until recently, I used to complete 700 hours of volunteer duty per year. (Once I finish my Masters I will probably return to that).