Year 6 Wyvern student Jed Robertson recounts the moment he found out about his Newington family history.

During my COVID isolation, I had to sit at the dining table and eat dinner with my parents every night. It was extremely boring until I found out that my great great great great grandfather, John Austin, was one of Newington’s first students.

On 5th June I met with David Roberts the Newington archivist to talk about my great great great great grandfather. In 1864 he was Newington’s first divinity (RE) student and second chaplain. The school was situated on the Parramatta River at the time and he had to ride a horse and carriage to school every day. Imagine what it would be like to ride a horse and carriage every day to school. The first Principal was Mr Manton and he died soon after my grandfather went there. John Austin did the funeral service.

After school John Austin became a Methodist minister and went to Samoa as a missionary. Eventually, he got married and had children and then one of his children had more children and one of them was my Mum’s grandma.

I know all of this because I have a book called Missionary Enterprise and Home Service about it. The book was written by him about his life and published in 1922 and has been in my family ever since. Mr Roberts was particularly interested in his life at Newington and what Newington was like at the time. The book describes everyday life which was really different from ours. From what could tell it was all about praying! The Uniting Church didn’t exist yet but was later formed from the Methodist Church.

After the meeting, I offered Mr Roberts the book to borrow to do some research. He found the original admission register, Here is the page with JS Austin’s entry, dated 11 April 1864. His and the entry for another theological student, Adin Parsons, are identified with a pencilled note “Wesleyan minister”, though their ages also stand out from the other entries. 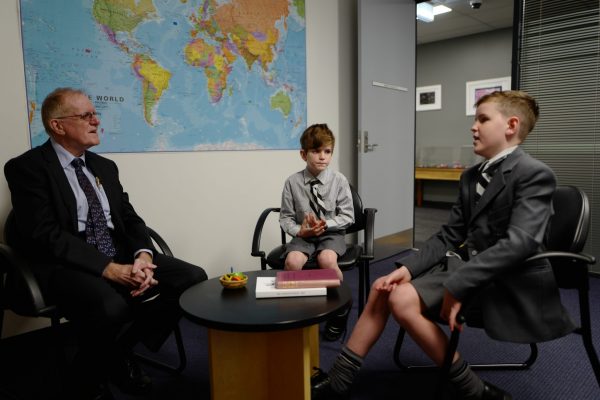