From the Headmaster Archive

The significance of being commissioned as Newington College’s 19th Headmaster underscores to me the privilege and the responsibility of taking on this role. I am aware of and grateful to the 18 Headmasters who came before me who built the school into what it is today – particularly the 18th, Dr David Mulford.

I am honoured too to return. I first joined the Newington community in 2002 and stayed for five years. I came to love and appreciate what was special about Newington and it’s fair to say I have a bit of ‘black and white’ running through my veins.

I have also inherited a set of Newington connections by marriage. My mother-in-law, Jan Morrison, was the exceptional Head Librarian here in the 1980s and the first female head of department in Newington’s history. Newington was her community. My brothers-in-law came here and my wife Fiona – as the vice-captain of MLC Burwood – was a member of the Newington College Chapel Choir. She travelled through Europe with them and sang in the Notre Dame Cathedral with them at Christmas. I am pleased, though, that she didn’t marry a Newington boy.

Since I have returned I have been impressed with the vibrancy, the energy, the diversity and the standards at Newington. In fact, the highlight of my return has been meeting so many students and learning more about them. I really appreciate the collegial welcome I have received from our excellent Common Room. I have also had good conversations with about 150 of our students … so far. It is still only 10 per cent but it’s early days. I apologise to the students whom I have introduced myself to twice – and in one case three times. I promise I am working hard. Whether it’s a game plan for cricket, the shades in an artwork, the book you are reading or the mountain you trekked in Nepal, I have enjoyed every single talk.

It would be premature for me to have a clear vision for Newington at this stage – in fact it would be quite worrisome if I did. I am really busy listening as hard as I can to what people feel and what they have to say.

However, there are a number of things I believe about education and schools and I would like to share some of them with you.

I believe our civilisation has a great deal to be proud of and a little bit to be ashamed of and that it is the role of schools to pass this on from generation to generation so our young people don’t think we actually turned up on this planet three weeks ago last Tuesday.

On the pride side there is our science. We humans have stood up from our caves and, in a blink of an ecological eye, looked out and around and worked out how the whole universe works. There is the stirring ethics of our religious and philosophical figures. There is the elegance of the Maths we have plucked from the ether and the beauty of our art, our music and our writing. There is the eventual triumph of a fragile liberal democratic system that allows many of us to live with laws, dignity and mission for our whole lives.

However, it’s not just a triumphal march. Our shame file includes our history of race and gender relations, some nonsensical wars and worse and our dark tendencies towards fascism that remind us all that we, as a species, must be forever vigilant.

I believe it is a school’s role to pass all of this on.  Many 50-minute blocks during every day at schools are used to examine these foundation stones on which we stand and I, for one, am loathe to let any of those 50-minute blocks just slide away.

However, I believe schools need to do even more looking forward than looking back. We can’t see the future, but we can predict enough to be nervous and excited in equal measure. Whole industries will continue to disappear and appear; truth risks becoming an ever more malleable commodity; social mores will increasingly be questioned; planetary problems – in a world still locked in nation states – will require planetary solutions and technology will confront, and offer up to us, the very limits of what it is to be human.

And this is just what we know.

I believe schools have to prepare the next generation for a future they can hardly see. To do this, paradoxically, I believe we have to reach – not out, but inside and explore what makes us human – what it is to ‘know thyself’. This is what will shape the visionaries, the leaders and the citizens to inhabit the 21st century.

So, for a start, I believe schools everywhere should be committed to students’ sense of community and real connection in the face of galloping isolationism. At good schools, we want people to find their human connections in themselves, their family, their teams, their school, their colleagues – as well as their country and their world.

Secondly, I believe schools should be committed to rousing creativity and rigorous critical thinking.  People’s minds should be like fireworks and steel traps at the same time. This includes understanding the difference between facts and opinions, truth and fake truth, and finding proper evidence in a world where the news cycle can be like a pile of trash in a hall of mirrors. Good schools and educators are committed to principled reason instead of thoughtless adherence, and to original speculation instead of passive acceptance.

Thirdly, I believe schools should be committed to hard work and rigour.  We have no idea what young people are ultimately going to work at in the 21st century but we do think it is going to be tough out there, so people are going to have to stretch themselves and stick at what they are doing. Good schools get students to practise that in their classes, on their sporting fields and on their stages. Many Newington students are not strangers to this – indeed I am almost in awe of what some manage to fit into a day.

Fourthly,  I believe schools should walk beside students in their diversity of faiths as they seek out the answers to the largest, most fundamental, spiritual questions in life. We can’t abandon the next generation to an unthinking materialism in which having more ‘stuff’ is the meaning of life. In Newington’s Uniting Church, Wesleyan tradition, and with our chaplains speaking about God each week, we are committed to planting seeds that may grow – immediately or even decades later.

I also believe schools need to keep values front and centre if they are serious about making students the very best versions of themselves for this future. This is tough, because is easy to find a list of 30, 50 or 100 abstract nouns that describe values – loyalty, justice, courtesy, generosity and more. But to make all these fine words make a difference here, schools must find ways for students to practise these values.

I am not usually one for quoting the wise words of others in my talks, but I will make an exception here. His name is Eliot. I don;t know his surname yet. He is the 1sts Rowing coach and he said it beside me in the tinnie at 6am on the Parramatta River to the 1st VIII after they had slogged their guts out – and he was about to make them do it again. He said: ‘You learn to swim by swimming, and you learn to courage by couraging. Now have courage and go again.’

And they did. They ‘couraged’.

I have been talking about young people – but I want to finish by talking more directly to the young people right in front of me at assembly now.

We know your adolescence is an amazing and tough time. Twelve to eighteen is so much more extreme than say 42 to 48 or 62 to 68. You walk in that gate as a child, and – bang! –  six years later you walk out of it an adult

We want your years at Newington to be as good as possible for you. We want your teachers to be not your judges or your gaolers, but your coaches, your advocates and your mentors. Us older teachers might have seen it all before, but we have never seen you before-  because you, in this place, are unique.

We want to walk alongside you for those remarkable years; for the highs when you get into that team or get your driver’s licence, or the lows when your partner breaks up with you by text or you get a lousy exam mark.

It is an honour to have been commissioned as Newington’s 19th Headmaster. I accept the role with the gravity it deserves, the dignity it demands and the potential it promises. The links from the first Headmaster Rev Moulton in 1863 to this day in the second decade of our 21st century remain unbroken and I commit to serving Newington College to the very best of my ability in the years to come.

A few days ago, as part of giving myself a guided tour of the College, I went to see the uniform shop. There I met several new Year 7s trying on the Newington black and white for the first time. There they were, already wholly formed characters, with their stories of primary school, their unique web of friends and family, as well as their favourite books, their favourite sports and their favourite movie over the holidays (usually Aquaman). At the same time, they were alive with the possibilities for their future as Newingtonians-to-be. Over the next six years, I wondered, were they going to be fencers or cellists, rowers or debaters, mathematicians or artists –  or a wonderful combination of these and more. There was excitement for the journey ahead, as well as some trepidation.  Either way, it is all there in front of them.

As a new starter myself, I sympathised with them. Although I don’t need to buy a new uniform (my suits still fit, even after Christmas), I have a similar sense of the excitement and potential the years ahead could hold. Even though I taught here for five years in the early 2000s, I am looking forward very much to learning and hearing so much in the months to come about the Newington of 2019.

As the previous Head, Dr David Mulford, so often said, Newington is a place where each person can discover what is possible. I think this really encapsulates the school’s vision. These corridors, classrooms, playing fields, chapel and stages act as springboards to discover the very best in each child.

I know already that, at Newington, we want each child to be curious and energised by the rippling wonder of our world and optimistic about their own place within it. We want each child to really stretch themselves by being the very best at something that matters. We want each child to see society as a collective to which they give back, not a resource from which they simply take. We want them all to be generous and open-hearted young men who respect the men and women around them, as well as themselves. We want it for the handful of boys I met at the clothing pool and for the many thousands of others who have and will walk through the gates too.

We are, and have all been, committed to making a College that is a caring community and a vibrant powerhouse at the same time. I hope our website gives you an impression of all that could be possible for your son at Newington. 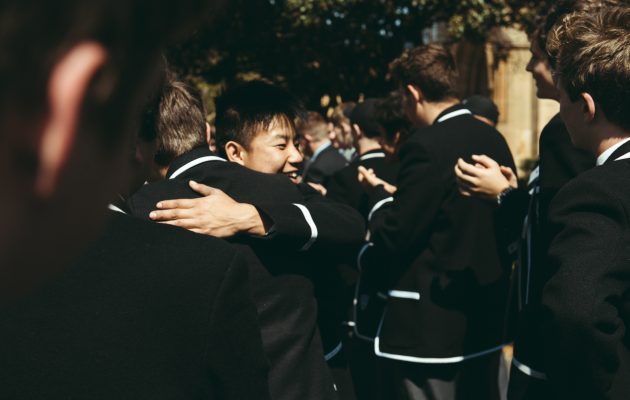