In a former life, working at Sotheby’s, Leigh Capel (ON 2005) brushed sand off Russell Crowe’s Romper Stomper boots, took auction bids for US television host John Oliver and told a collector one of his most prized possessions was worthless. Today, as the director of Belle Epoque Fine Arts and Antiques, he has a stockroom of more than 2500 precious works spanning 500 years of art representing ‘the unappreciated to the iconic’ and exhibits at some of Australia’s most prestigious art and antique events.

How does someone who never studied fine arts end up owning a specialist gallery?

I fell into art by accident. I studied filmmaking in Sydney and San Francisco, worked on the London Olympics Games with NBCUniversal, then moved home in 2013 without a job. As a favour to my mum, a small auction room gave me a start moving furniture and disposing of dead people’s possessions. Within six months I was the fine art photographer for the business and within two years, the art researcher and valuer. Following stints at Menzies and Mossgreen, I finally rose to Sotheby’s, working on Russell Crowe’s ‘Art of Divorce’, ‘Kirk Pengilly (INXS) Collection’ and ‘Important Art from the John Schaeffer Collection’. Disenchanted with the auction industry and working for other people’s dreams, I quit my job to start my own art gallery in Petersham as an extension of mum’s antique furniture business, Belle Epoque Fine Art and Antiques. I had just turned 30.

What was the most unusual thing you worked on at Sotheby’s? Why would you describe it that way? 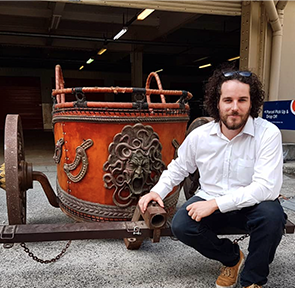 Russell Crowe’s ‘Art Of Divorce’ showcase was a huge project that included iconic pieces of film history such as Crowe’s Gladiator costumes and props, a priceless antique violin from Master & Commander, and his own memorabilia collection including Johnny Cash’s Grammy, an original Errol Flynn film costume, and a huge customised South Sydney Rabbitohs motorcycle by American Chopper. It was an eventful project. Lot One was Crowe’s original Romper Stomper boots, covered in sand. Rusty insisted the sand MUST remain on the boots, but he gave me this order several weeks into the project and I had already brushed a fair bit of it off. There was enough authentic sand left on the boots for the sale (they made $10,000), but there were times I considered driving to Bondi to collect more! Also, my boss lost part of the Gladiator breastplate on the street during transportation. Luckily, I managed to find and repair it (it sold for $150,000).

How did you become interested in the art from the Belle Epoque era?

Mum’s antiques business specialised in furniture from the period 1880-1930, the Belle Epoque period. Her pieces appear in big productions including The Great Gatsby, The Water Diviner, Hacksaw Ridge and Australia. Growing up, our house was filled with vintage prints from her favourite artists such Klimt, Manet, Monet and Renoir. Then, when I lived in Europe, I would regularly visit International galleries and admire the artists of the period, especially in Paris; the Impressionists, Post-Impressionists and Moderns. Montmartre was the epicentre of creativity at the turn of the 20th century, and all the greatest artists were based there. The Belle Epoque era not only influenced fine art, but architecture, design, fashion and lifestyle. It was the bridge between Classicism and Modernity.

What inspired you to open your own gallery?

Working in fine art auction rooms for six years, I gained invaluable knowledge about how to distinguish quality, taste, desirability and the value of art. I began to collect and sell pieces I could afford on my tiny wage as a hobby. By the time I was working at Sotheby’s, I had more than 2000 original works by respected and renowned Australian and International artists. When my mother wanted to scale back her operations I saw the opportunity to continue the business’s great reputation, but restructure the business as a fine art gallery.

What has been the most expensive piece you handled?

At Sotheby’s, I was responsible for handling expensive pieces daily. Works by Brett Whiteley, Russell Drysdale and Arthur Boyd regularly sold for more than $1-2m, and I was tasked with the job of hanging these pieces for the auctions and delivering them to the buyer after. The highlight was delivering a significant Arthur Boyd work to an English client. It was to hang in the place of his other prized possession, the best Rolf Harris painting I had ever seen. He asked he what I thought of it – and I said: ‘It is worthless’. My boss’s jaw dropped. I explained why to the client, and he was so impressed and thankful he has become one of Sotheby’s most loyal clients. It didn’t stop me being reprimanded by my boss … but I learnt honesty builds trust.

How did you come to take bids for John Oliver in the Russell Crowe sale? 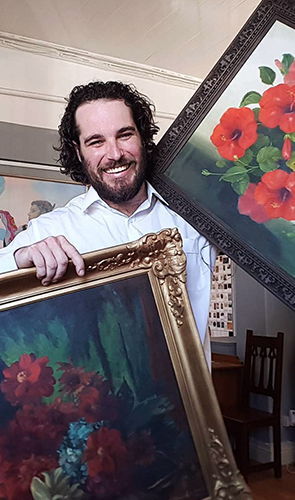 John Oliver’s bids were made under a pseudonym. Later I found out there had been an ongoing campaign on Last Week Tonight with John Oliver on US national television to buy some of Crowe’s stranger memorabilia items. He bought the (unwashed) Cinderella Man jock strap and Robin Hood executioner’s hood to donate to the last Blockbuster Video store in the US.

Why did Belle Epoque choose thespian and artist Barry Otto for a major retrospective?

I was approached by Barry’s respected filmmaker and actress daughter, Gracie, about doing a show for her father. Living in the Inner West, Otto had passed my gallery many times, and his love of Victorian era antiques and art was the perfect fit for our gallery. Barry has had glorious career as a leading actor and thespian, and is also an accomplished artist, beginning in his early years in Brisbane working as a fashion illustrator. His works are stunning homages to his heroes, in a range of mediums; drybrush, watercolour oil paintings. The work is special because it is reflective of his unique talent and creativity, but also his eccentric personality. The opening was a huge block party in Stanmore with more than 250 people including film director Gillian Armstrong, actors Miranda Otto, Brendan Cowell and Claudia Karvan, designer Akira Isogawa, theatre director Neil Armfield and singer Sarah Blasko. Vogue said ‘the night was one for the history books’.

What exhibition are you most proud of?

Last year, I was approached by The Sydney Fair, one of Australia’s biggest antiques, fashion and art events, to take the last-minute place of the recently deceased, legendary art dealer, Lauraine Diggins OAM. For a gallery less than two years old (lead by such a young art dealer) taking the place of such a huge figure in the Australian art industry was a huge accomplishment. We were then invited to exhibit at last year’s Melbourne Fair. We have been invited back as a headliner this year, with a bolstered catalogue, including rare, original works by Brett Whiteley, Margaret Olley, Emanuel Phillips Fox, Salvador Dali, Marc Chagall, Roy Lichtenstein, David Hockney and Katsushika Hokusai.

How did Newington College shape your life and the person you are?

My experiences and the leadership qualities I learnt at Newington have made me the person I am today. I was very lucky to have several teachers who were passionate, inspirational and encouraged me to follow my instincts with an open mind – teachers who taught me to question traditional and expected values and processes, and to be strong and expressive with my opinions. I was taught to be thorough and organised. Even though I might not have utilised this as much as I should have during my time at Newington, those qualities have become invaluable in running a professional and successful gallery. I am so thankful for this.

Headmaster Michael Parker was my HSC English teacher and it was such a gratifying experience having him visit the gallery last year, so he could see what I achieved.

What’s your favourite memory from your time at the College?

Most of my favourite memories at Newington were on the rugby field or tennis court. I wasn’t the best student, but I was surrounded by people who challenged me. I do remember leaving the chapel on our last day, reaching up and touching the Wyvern above the threshold and coming out onto the drive with a huge sense of accomplishment. It was a distinct realisation of a closing chapter. It was the first time I realised real life was approaching and I would no longer have that same structure and routine Newington had provided, and that the world was laid out before me now. And I had the tools to take it on.